Send Us A Message
SCHEDULE SERVICE

Posted at 16:09h in Uncategorized by Jon Bibb 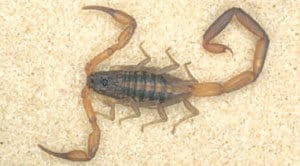 Scorpion season is upon us in South Texas. In the San Antonio area where LoveBug Pest Control is located, scorpions are out and terrifying a lot of homeowners. In all areas that surround San Antonio, scorpions are a serious pest that we have to deal with each year. Towns to the east, west, and south of San Antonio all experience a rise in their scorpion populations every year around this time.  But the area that seems to get hit the hardest with scorpion issues is the area north of San Antonio – the Texas Hill Country. The rocky landscapes of the Hill Country provide an excellent habitat for scorpions to hide and build nests.  And when the summer gets hot, so do the scorpions.  Their perfect cooling center is the inside of your home! Some quick facts about scorpions.  First of all, although there are over 20 species of scorpions in Texas, the most common species found in our area is the striped bark scorpion.  It’s about 2.5 inches long and has a yellowish color. Scorpions are arachnids like spiders.  They have a two segmented body and eight legs unlike most insects that have only six legs and a three segmented body.  But scorpions have a very tough exoskeleton shell which is hard for most pesticides to penetrate. They are considered beneficial insects because they are meat eaters, and the meat that they like to eat is other bugs. For most people, their sting is painful but not life threatening.  There is no doubt that you will know it when you get hit by a scorpion!

At LoveBug Pest Control, we use a summertime formula that works well with scorpions and spiders. Also, maintaining regular pest control helps keep the population of regular bugs that they like to eat at a minimum, which is an alternative way of keeping scorpions at bay. Keep their food source in check, and you help keep scorpions in check too.

LoveBug Pest Control serves San Antonio, New Braunfels, Boerne, Seguin, Schertz, Cibolo, and all areas in between!  Call us at (210) 396-7100 to schedule an appointment today!